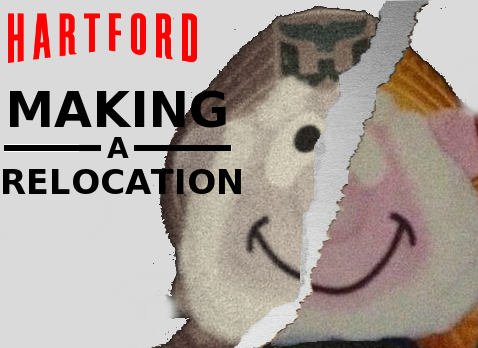 “Making A Relocation” is an ongoing series exploring the inconsistencies between the facts and the public narrative surrounding the demise of the Hartford Whalers. If you’re new to the series, we recommend that you start at the beginning:

This thing is really starting to sprawl on me. I set out with nothing but a premise and a hunch: The narrative that the Whalers are gone because the fans didn’t support them is bunk. I never thought through the details much before sitting down to write about it, mainly because it just seemed self-evident. I’ve lived here my whole life. I remember the last season, and I remember how hard it was to find tickets. It was nothing like the scenes you see today in Phoenix and Raleigh and Miami, years of relocation threats answered with a shrug and a sea of empty seats. I can’t recall any time when the “lack of support” line felt like anything other than a pretense for some unknown ulterior motive.

Making sense of what actually happened? That’s much more complicated.

At this point, I can at least tell you who I know ISN’T to blame. It may seem like I was coming down hard on Eddie Johnston last time for all those bad trades, but if there’s one common phrase you hear when you start talking about those days with people close to the team, it’s “out of his hands”. I can’t prove anything and I doubt I ever will. But nobody who got within 100 feet of that locker room seems to believe that Eddie Johnston or head coach Rick Ley had any control over the tension and gutting of the that team. “It came from above,” they say, somewhat ominously.

“Y’know, like, someone in ownership”, they say. Whoever that may be.

Which brings us at last to this most dubious of characters: Wally the Whaler. 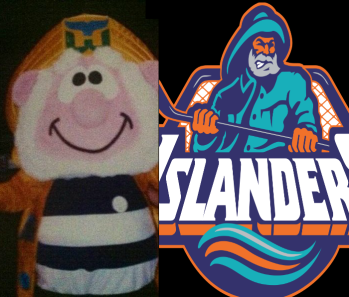 In 1991, hot off the senseless loss of Ronnie Franchise, this strange raincoat-clad thing was foisted upon the fans of Hartford as a sad sort of consolation prize. Written just a scant three years after the dizzying heights of Whalermania, this piece from the Courant paints a picture of that year’s season ticket holder party as a tepid festival of patience-worn-thin. Between the loss of key franchise players and the bottom falling out of Hartford’s corporate economy, it was remarkable that we’d lost only about 1700 season ticket holders, retaining a respectable base of 7,500. Asked what they would like to see, the same answers came up again and again. Stability. No more changes for change’s sake.

There is little question as to Gordon’s ability to deliver there; he absolutely could not. As the protracted legal dispute surrounding the ownership of the Whalers dragged out in public for years, Colonial Realty’s legal troubles both shamed the team and left it financially strapped. Stability was a distant memory. In it’s place was Wally.

Just two months after that trying season ticket holder meeting, less than a month into the season, Gordon issued a cash call for operating expenses in an attempt to seize control of Colonial Realty’s 37.5% stake. Colonial responded by filing bankruptcy. A ten-day player’s strike compounded the front office woes, and despite a strong seven-game playoff series against Montreal, attendance plummeted to a record low of 10,896.

Herein lies the kernel of truth buried within the lie I set out to dispel; we had a few pretty bad years. A lot of folks will look at the Whaler’s attendance without any context and are quick to see a team that was never supported. And yes, compared to today’s low end of about 15,000 average attendance, the Whalers might seem lightly attended.

Some context: the Hartford Civic Center, originally built to World Hockey Association standards, was only meant to hold 10,000 people. The collapse of the roof allowed us to retrofit it and cram about 14,000 people into the nosebleeds. Most years fell somewhere between 12-13,000 on average, which was respectable for the times. Throughout the eighties, Hartford outdrew Boston 50% of the time depending who was hotter on any given year. And those “years in the wilderness”, as I’ve so dubbed Hartford’s low point, never dipped below 10,000. League stalwarts such as Pittsburgh and Los Angeles sunk far lower in their darkest days. Does that make 10,000 okay? No. But it’s three years out of 22, coinciding both with the depths of a recession and a complete disaster in the front office. It truly took a perfect storm for Hartford to go from a model franchise near the top of the league in revenue to a laughingstock in less than five years.

These bad years are a blur of staffing changes. General Managers and coaches of varying quality came and went quickly, rumors of Gordon’s micromanaging swirling around every departure.

Rick Ley takes the fall for driving Ron Francis away, is replaced to great fanfare by Jim Roberts, who lasts exactly a year before being replaced by Paul Holmgren. Holmgren leads the team to it’s first season without making playoffs in years, and is rewarded with the additional position of General Manager when Brian Burke departs for a job with the league. Holmgren’s alcoholism leads to a drunk-driving arrest and a stint at the Betty Ford clinic, prior to which he steps back from the coaching position to serve only as GM. His replacement? Pierre McGuire. 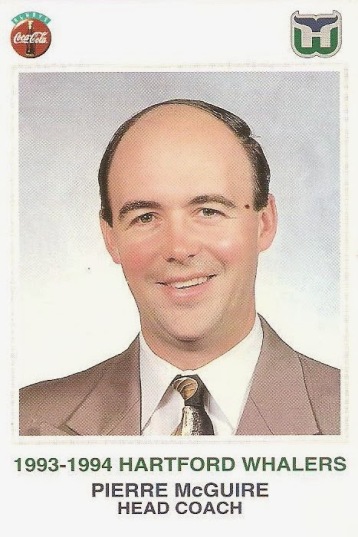 At this point, I’m reasonably confident that the franchise is being deliberately dismantled in order to facilitate sale and relocation. There is no logic behind the choices being made, no possible expectation of a good outcome. Good people are scapegoated and fired for choices they didn’t make, incompetence is rewarded with rapid promotion. The Whalers front office descended into swirling chaos.

To the extent that it’s possible to pinpoint the moment that Richard Gordon stopped trying to save the team and started tearing it apart to sell for scrap, it would probably be the brief tenure of Brian Burke. Burke is controversial in Hartford. It’s hard to argue his worth as a hockey guy. He brought in Sean Burke, the first and last solid goaltending the Whalers had since the glory days of Mike Liut. He drafted Chris Pronger. There was a sense of a legitimate rebuild occurring as opposed to the slapdash fire sale that had been gutting the team since 1989. On the other hand, he was an outsider. He walked into Hartford and correctly assessed the franchise as being deeply damaged and that its reputation had been badly sullied. He made off-ice changes in an effort to turn the page that were received with mixed reviews at best. The uniform and logo change, swapping the dominant kelly green for navy blue with with silver accents, was the least controversial. Many folks prefer the classic uniforms, myself included, but the new uniforms were undeniably sharp and modern. Much less popular was his decision to axe the Brass Bonanza, the goal song which is still in use today in Hartford for UConn hockey. In the end, however you felt about Burke, he had talent and made a serious effort to turn things around. When he left to take a job with the league amidst ominous whispers of interference from Gordon, it marked the beginning of the end. From that point on, it was hard to escape the feeling that the Whalers were deliberately failing on every front.

The one player I remember best from this era was Pat Verbeek, who later became to be known as “The Little Ball of Hate”, a name so appropriate that my mind has retroactively attached to all of my memories of him. He was the unlikely hero of the team, leading us in both points and penalty minutes two seasons in a row. This was an era where the Whalers couldn’t get much right, on or off the ice, and so they did the one thing they could to keep us entertained: Fight. Both on and off the ice.

Shortly after that, Pierre McGuire was fired as coach. Speaking with shocking candour, Captain Pat Verbeek minced no words and proclaimed openly that this firing “was the best thing that could haved happened”.

By chance, a tiny blurb in a Philadelphia newspaper from March of that year provides me with the closest thing I have to a smoking gun. The article, which is largely about the bar fight in Buffalo, closes with a few “around the NHL” bullet point blurbs.

One blurb in particular, which I’ve seen nowhere else before or since, is extremely ominous in hindsight:

“The Quebec Nordiques denied a report from a Montreal radio station that they would be sold to Detroit-based Compuware Corp. and moved to Phoenix after the season. Team officials said they want to stay in Quebec. The team is trying to get a new arena with luxury boxes.”

Of course, as we all now know, the Nordiques did not get their new arena and they did in fact move. They were not purchased by Compuware and went instead to Colorado where they became the Avalanche and broke the hearts of Quebec City by immediately winning the Stanley Cup. Winnipeg followed next to Phoenix. There were rumblings of the same fate befalling Edmonton, but they survived by the grace of Gretzky and the cups of his dynasty. All but one of the small World Hockey Association teams that merged into the league in 1979 would fall in the end, each relocation hinging on league demands for a new arena in the midst of a recession, gleaming new sunbelt markets waiting in the wings to receive them.

With Edmonton safe and Quebec and Winnipeg both gone south, that left Hartford’s fate alone undecided, thought not for long. Within just a few days of Pierre McGuire’s firing, Compuware, the would-be buyer of the Quebec Nordiques, extended an offer to buy the Whalers. In less than a week, the state of Connecticut and Richard Gordon negotiated a buy-out of the remaining 25% still held by local corporations, and the franchise passed from Gordon’s hands to the state, and from there to Peter Karmanos, principle officer of Compuware. The deal was lauded as the end of Gordon’s reign of terror, salvation from instability and a new day of hope for Hartford. Compuware and Karmanos stated unequivocally that they were here to stay.

Fans rejoiced, however briefly. Attendance immediately began to climb again. We didn’t get the Philadelphia paper in Hartford back in those days.

Little is made of the competing offer made by an entirely local ownership group fronted by William F. Dowling. It’s unclear on the surface why the state committee charged with seeking a new ownership group for the Whalers settled on Compuware and Karmanos, especially when Dowling’s local group came with a 20-year commitment to Hartford and Compuware’s offer reduced that to only four years.

This final mind-boggling decision proved to be the one that ultimately sealed Hartford’s fate, though in hindsight the intent becomes crystal clear. Who headed that commitee which inexplicably chose Compuware over Dowling?

The Honourable Lowell P. Weicker, former governor of Connecticut and current board member of the Compuware Corporation.

In the next installment: We enter the home stretch as we examine Richard Gordon’s breaking point, before delving into the shared tainted legacy of Governors Weicker and Rowland, the folly of NFL dreams, and a “Save the Whale” campaign that wasn’t supposed to work.

6 thoughts on “MAKING A RELOCATION, PART THREE: Four Years in the Wilderness”