I have plenty of friends who are New York Mets fans. And while they by no means have a monopoly on suffering, it is a major (the major?) component of their experience. So much so that Jon Stewart could use it as a running punchline on The Daily Show. In essence: “This is horrible, year after year, and we are all going to feel a great deal of pain together this year, as we did last year, as we will next year. We are Mets fans.”

The majority of these fans are adults. Primarily grown men, with jobs and kids and houses and the deeply guarded fear, slowly morphing into knowledge, that their lifelong dream, whatever it may be, will remain just that.

True fanaticism as it applies to professional sports does not stand to reason. Multimillionaires who do not know you (nor particularly care to know you) play a…

When someone asks me why I still care, I think of Jean Marie Colbert.

Jean Marie succumbed to neuroblastoma when she was only 3. As unfathomable as the idea of losing a daughter that young seems to me, Jean Marie’s father Hill Colbert did not give up. Hill partnered with the Hartford Whalers to found the UConn Children’s Cancer fund. Eight years later, when Hartford hosted the NHL all-star game, Jean Marie’s name was on the wrist band worn in the iconic image that came to represent the charity. A full generation later it still exists, and is in the words of WTIC personality Scott Gray, the “one part of the Hartford Whalers legacy that will always belong to us, and us alone.” Jean Marie lived.

I learned only recently that my friend Tom was one of those kids who benefited from the Cancer Fund. He had his first (successful) treatment for cancer at the age of one. In addition to helping fund his treatment, the Whalers invited him and other former patients down to meet the team after his cancer was in remission. A picture of him high-fiving Mark Johnson, Whalers captain and Miracle on Ice legend, made it to GOAL! magazine. A few years later, upon learning that he shared a birthday with Ron Francis, he wrote the greatest Whaler a letter telling him his story. Ronnie sent him a card and autographed memorabilia every year on his birthday until he left Hartford, including an autographed hockey stick which was tragically roughed up by a sibling playing street hockey. Tom is still alive today, and has kids of his own. He still has Ronnie’s stick.

“I’m looking at this stick and thinking about how much I hate my brother.”

Karen Weeks died this year at the age of 53. She came to Hartford with her husband, goalie Steve Weeks in 1984. While I 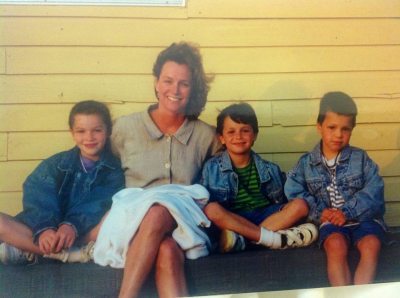 remember the Whaler’s wives being very active in organizing charitable events on behalf of the team, I didn’t know until she passed away that Karen was the one who designed the iconic poster (first used for the 1986 NHL All-Star game) which is remembered to this day. Steve was traded away in 1988, but upon his retirement in 1993 came back to Hartford as part of the coaching staff. He and Karen remained a part of the community until the team moved. Though she passed away nearly twenty years after the team left, she was mourned by many in Hartford.

In 1978, the same year that Jean Marie passed away, the roof of the Hartford Civic Center collapsed overnight under the weight of a heavy snow fall. Though miraculously no one was injured, the timing could not have been worse and it threatened to be a death blow to the franchise at a critical time in its history. The WHA was becoming increasingly unstable, and Hartford’s only hope was a merger with the NHL. Hartford did not surrender. The Whalers Booster Club immediately reported for a 24-hour shift of office work, doing what was necessary to temporarily shift the team to Springfield while the Civic Center was repaired. The business community and the city rallied to repair the arena and make it bigger and better than it had been. The 10,000 seat arena, which at the time was a potential roadblock preventing Hartford from merging into the NHL, was elevated to a 15,000 seat arena and the team was admitted into the NHL for the following season. The fans and leadership of Hartford refused to quit and turned a near-fatal blow into a blessing.

The nineties were a time when irony and cynicism reigned, and maybe the Whalers were the wrong team in the wrong place for such bitter times. As the team’s ownership shifted from local businessmen to carpetbaggers with designs on southern relocation, the traditions of the team’s hey-day were discarded one by one. The Brass Bonanza, Pucky, and the color green were all replaced in an effort to seem “cool” and “edgy”, but just a few short years after the height of rabid-but-dorky Whalermania, no one was buying the Insurance Capital of the World as a sudden epicentre of hipness. Hartford was not and will never be cool, trying to play that game was either a fatal misstep or deliberate sabotage depending on who you ask.

This is what Tom and I were talking about when he happened to mention his brush with childhood cancer. If the eighties and Whalermania were our wide-eyed and innocent childhood, the nineties were our cynical teenage years. Which is literally true in the case of Tom and I, who are in our mid-thirties. Something Tom said as we talked about this which stuck with me is, “there’s a time when you need to stop worrying about being cool”.

I think that time has come.

The standard uniform of all terrible bandwagon Bruins fans in the 1990s.

The notion of being too cool for the Whalers and being mocked at school by a fairweather Bruins fan seems downright foreign in 2015. Much to the chagrin of my better half, it’s impossible to go out in public in a Whalers hat without someone starting a conversation. It’s gone from the uncool little sibling of New England hockey to a cultural touchstone, Connecticut’s claim (along with UConn) to a distinct identity from Boston or New York. More importantly, with the benefit of twenty year’s hindsight, it’s a symbol of the important things our community lost along with a hockey team. Big things like the founding beneficiary of the Children’s Cancer fund. Little things like Ron Francis giving his game sticks to sick kids.

As I write this, UConn’s hockey team, in true form as the heir to our Forever 500s, just ended a brutal 8 game losing streak in a (less characteristic) sweep of nationally-ranked #5 UMass-Lowell. This time the crowds never waned. Game seven of that ugly losing streak set a franchise attendance record. On a Tuesday. When they did score, which admittedly wasn’t often enough, you saw three generations of Hartford on their feet clapping to the Brass Bonanza. No irony. Zero coolness.

Sports loyalties are ultimately not the important thing here, as much time as we spend debating them. It ultimately matters little whether or not you rooted for the Bruins or the Rangers or the Whalers, or what team has filled the void since they left, if any. What matters is how this team benefited the city, whether through the hundreds of thousands of people they brought downtown to spend money, the regional pride they instilled, or the charities they founded and sustained.

Do I still care after 18 years? You’re damn right I do.

Will I push back at people who, for whatever sick reason, feel the need to tear down both the history and the future of my city? You’re damn right I will.

Cancer, premature death, roof collapses, losing records, and a laundry list of crooked politicians have all conspired to kill us. As of yet, none have succeeded. I’ll be damned if I roll over and choose surrender after all that.

We aren’t done. In the spirit of Jean Marie and the charitable legacy of the Hartford Whalers, Pucky the Whale will be hosting a blood drive January 11th, 2016 at the Hartford Civic Center: