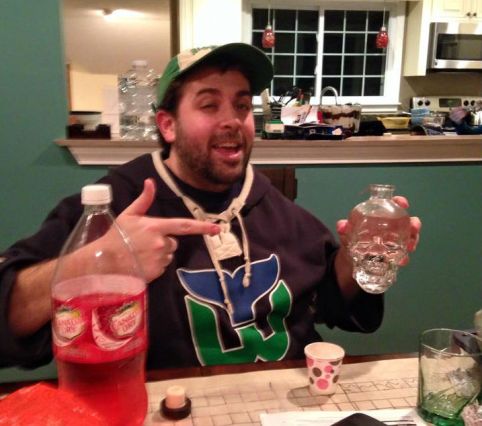 In case you missed our last installment, when we left off I was about six shots into a bottle of Evan Williams and ranting about how much the AHL sucks. That’s as good a place as any to pick up with #6, the shitshow in Springfield:

Make all the excuses you like about how Springfield’s attendance being low, or how it “just makes sense” for Arizona to move the team to Tucson (as if anything about the Coyotes makes sense), but I’m not buying it. Before you can convince me that 3500 people isn’t enough to support the team in Springfield, you need to show me 3500 residents of Tucson who give a shit about hockey. I have a feeling Springfield could enjoy another decade of hockey and celebrate their centennial before you found that 3500.

Springfield is a founding member of the AHL. They were just fine for many decades, and the fact that they suddenly aren’t isn’t because Springfield has changed or the media or whatever other nonsense excuses are being tossed around. The problem with the AHL in Springfield in the AHL. It’s no coincidence that traditional markets went to hell at the same time that the AHL became strictly developmental and started answering to the AHL instead of it’s fans. People in Springfield expect better because they can remember an AHL where the city that hosts the team matters more than the NHL team which owns it. The fact that an independently owned team in Springfield that has had myriad affiliations over decades, and a history tracing back decades before the Arizona Coyotes existed, should have their very existence be contingent upon what “makes sense” for Arizona is ludicrous.

Not only will the AHL let this happen, but I’d bet money that they orchestrated it. This is a league that cares more about saving their parent league a few bucks on call-ups more than a 90 year-old fan base. Have fun in Arizona. They’ve had great luck with one team; I’m sure two will be a rousing success. I’ll be watching cawlidge hawkey.

#5: THE BIGGEST CROWD EVER MARCHED TO BRING BACK THE WHALE ON ST. PADDY’S DAY

The headline kind of says it all, so let’s talk about the Brass Bonanza Truck.

Look at this beautiful goddamn truck. If you didn’t go to the parade, you missed this thing rolling up to the state capitol building loaded with whiskey, cheap whiskey and smoked meat. You missed watching it lead a massive herd of Whaler fans through downtown while Brass Bonanza blared out of four stadium-style speakers. You missed being able to hear the Whaler National Anthem clearly from a full two blocks away. You missed a day when drinking in public got you a high-five from the cops, a day when thousands packed the streets of Hartford and acted (for once) like they were proud to be there.

There’s not a lot of good spirit and civic pride in Hartford these days, but we give it our all on St. Paddy’s Day, and this year was special.

#4: NINETEEN YEARS TOO LATE, WE FINALLY AGREED ON A NEW ARENA PLAN

I won’t get into the specifics here, I’ve already written about it at length here. Let’s just bask for a moment in how close we’ve come to reversing the course of a fatal miscalculation made many years ago. Having established at length that the myth of attendance causing the Whalers to leave is complete horseshit, we now know that the real reason our Whalers are drawing flies in Raleigh as the Hurricanes is because Governor Rowland refused to spend a penny on a modern arena, instead betting everything on the fool’s gamble of the New England Patriots.

The arena is and always has been the only real barrier to the keeping or returning the NHL, but it’s a real one. A dozen southern hockey teams can fail and it won’t do us a lick of good if there isn’t a realistic place for them to move to in our city. The old Civic Center has great views and a lot of memories and looks halfway decent after the cosmetic renovations, but it’s about five years away from the ice plant blowing out for good and the concourse is taxed to its limit when the place is only half full. NHL pipe dreams aside, UConn and Hartford need to get together on this before it’s too late and they share a collective backslide instead of sharing an arena.