This seems like a good time tell this tale of the Whale, as Hartford has been talking about mascots a lot lately between Puckygate and the unveiling of the Yard Goat’s new mascot(s), Chompers and Chew-chew. The two mascots were chosen from submissions gathered from a viral internet marketing contest and unveiled this past Friday at Capital Preparatory Magnet School in Hartford.

The got the colors right, at least.

While I’m not sure that Chompers or Chew-Chew will ever reach the same iconic status that Pucky the Whale has, the buzz was mighty loud in that auditorium. Full-disclosure: I attended the event with the intention of writing about it, and ended up filling in as a last-minute stand-in for Pucky himself. My view of the proceedings were from the disorienting vantage of a tiny porthole in a thirty pound fiberglass whale head while being mobbed by dozens of screaming school children and trying to dance. That said, I feel that I can reasonably testify as to the sheer volume of that auditorium. The crazed goats emerged immediately following my/Pucky’s entrance, and the whole place immediately started shaking as several hundred kids ranging from kindergarten to high school stomped their feet in unison while chanting “GO GOATS!” 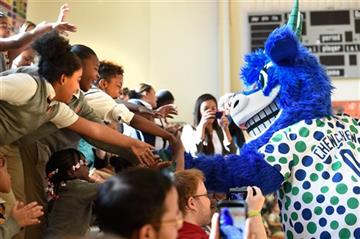 The grown-ups didn’t get it, but the kids went nuts.

Such is the power of symbols.

In trying to discern the origin of Pucky I came to the conclusion that the key to his longevity and the visceral reaction that he elicits, whether positive or negative, stems not from his existence as a physical mascot (which began only in 2010 with the AHL Whale), but in his much longer tenure as a symbol (beginning in Boston in 1972) and when he was formally christened as “Puckie” in Hartford in 1976. The symbol of “The Whale” had become so ingrained in our collective consciousness that when I wrote the article about Pucky being ejected from a Wolf Pack game, people started to question exactly when Pucky began to exist and I started second-guessing my own memories. The costume version of Pucky seemed so familiar and so closely linked to the symbol that I recalled from my childhood that I started to question whether or not I had in fact seem a costumed Pucky in my youth. I wasn’t the only one suffering from this confusion:

It turns out that this question has no simple yes or no answer. I pieced together the details over the course of a few weeks after speaking to former team staff from the WHA, NHL and AHL. Some pieces of the puzzle I found in archived versions of the Whaler Sports & Entertainment web site which has been offline for years, some in a long out-of-print children’s coloring book sold in the Civic Center Mall in the 1970s, which came to me by the way of a storage container auction on eBay. What I’ve ultimately been able to assemble, as far as I can tell, is the first complete timeline of Pucky (nee Puckie) the Whale. Part of me was reluctant to keep going as the rabbit hole got deeper and deeper, but whenever I began to get discouraged I reminded myself that we live in a world in which the Hartford Courant devoted actual man hours to track down the origin of the Brass Bonanza.

Some have pointed out that the amount of time being spent as of late by grown men, members of the media included, discussing silly animal costumes seems a little bit ridiculous. But in unravelling this story, I have found that when a mascot is truly effective it transcends the silly animal costume and becomes a vector for a symbol and a brand. In Hartford’s case, it is nothing short amazing that this ridiculous little Whale has endured as a symbol of a team and a city throughout four decades, three professional hockey leagues, and numerous catastrophes. It might be ridiculous that grown men with an irrational fondness for a goofy, green cartoon Whale have consistently continued to drive Hartford’s merchandise sales into the NHL’s top ten almost twenty years after the team left town, but it’s also remarkable.

It is, in my opinion, a great Hartford tale that deserves telling.

THE COMPLETE HISTORY OF “PUCKIE THE WHALE”, A TIMELINE:

The original form of Pucky as a shoulder patch in the WHA.

The iconic entrance to the Whalers Team Store in the Civic Center Mall.

I wonder how Pucky felt about that harpoon…

Wally the Whaler: The face of a franchise being sabotaged.

From the official WS&E press release by Brittany Burke:

Hartford, CT -Whalers Sports and Entertainment announced today that “Pucky,” the iconic secondary logo for much of the Whalers history, will come to life as a mascot on August 14, 2010 at the Whalers Fan Fest.

Standing over  6-feet, 6 inches tall in skates, Pucky will debut at the Fan Fest event and will be available to pose for pictures and interact with young fans and adults alike.   In addition, a Pucky coloring book will be available at the  official Whalers stores at Fan Fest.

After Fan Fest, Pucky will be visible at many Whalers and community events in the greater Hartford community.

Pucky is being created by International Mascot Corp in Edmonton, Alberta.  IMC has manufactured a wide variety of corporate, entertainment and university mascot costumes.

Unable to use a planned logo reminiscent of the original NHL logo, or the Whalers name, the AHL Whale embraced the identity of “The Whale”. Their primary logo was a modern and aggressive variation of the alternate Pucky logo. 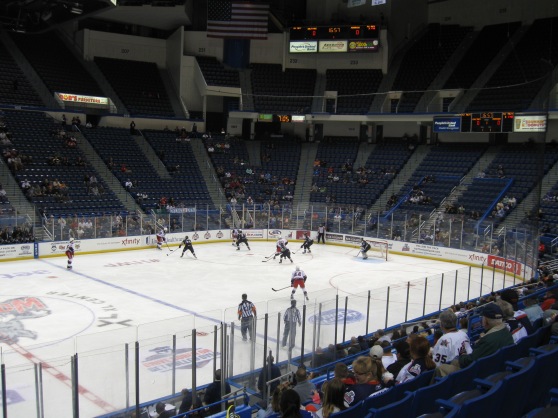 A depressingly common scene in Hartford following the demise of the Connecticut whale.

Despite claims in the media that the incident was overblown and that Pucky has an open invitiation to the XL Center at any time, the Wolf Pack has carefully avoided making an comment on the matter, even going so far as refusing to answer inquiries from season ticket holders and ignoring a very public attempt by Springfield’s AHL team to welcome disgruntled Whaler fans. Pucky has yet to receive any invitation.

Yet again, the Baldwins and the Whale have become convenient scapegoats for the dirty (and costly) backdoor dealings of Connecticut politicians and the complicit media. The same “journalists” who beat the drum on behalf of Peter Karmanos and a criminal governor that the fans were at fault for the Whaler’s relocation are still blaming the fans 20 years later, acting as if the out-of-state corporations pocketing millions of dollars of taxpayer money while failing to perform with even a modicum of competence are somehow the victims of a grassroots marketing effort being mounted largely by passionate pro-Hartford fans who stand to gain little but some regional pride.

As we approach the eve of one of the Wolf Pack’s two possible one-year options to remain in Hartford, maybe mascots and symbols aren’t such a ridiculous thing to be talking about. The regional pride and tradition that they represent come into sharp relief as UConn Hockey continues to exceed expectations, the Yard Goats sell record amounts of merchandise simply by paying homage to the Whalers (the Double A baseball team just announced that they are opening up a second store location in the Westfarms Mall in response to the demand for their swag), while the Wolf Pack’s most notable achievement this year was a record low attendance for a hockey game in Hartford on the second night of the season. When the Wolf Pack existed in a void, blaming the fans and the market was a convenient excuse. Those excuses aren’t flying any more.

At the time, the end of the Connecticut Whale felt like kind of a final blow to the market. A lot of people (myself included) were reasonably certain that we’d been knocked down for the last time and weren’t getting up. I should have known better. As many times as Hartford has been knocked down, we’ve gotten back up every time. Even the roof of our arena, crushed beneath the weight of a heavy winter’s snow and the short cuts of a lazy contractor, eventually defied gravity and rose from the rubble. Hartford is like a scrawny fighter who doesn’t know when to quit. It keeps getting up.

I’ll leave you yet again with the words of a man much wiser than myself, George Ducharme’s closing paragraph in the original Puckie book. He says it as well as I ever could:

Special thanks for answering questions and providing information, sometimes at great length, for this piece: