I realize that there is nothing unique about what I’m about to say; if anything I’m late to the party. Except for the CT Whale years and a slight uptick last year following arena renovations and some carryover from UConn hockey, Wolf Pack attendance has plummeted every year since they came to town, culminating in a record low of about 1500 at only the second game of the current season. The modest inroads made by the short-lived Connecticut Whale effort were mostly lost after a lame duck season under AEG and a sudden rebrand to the Wolf Pack by MSG. The numbers don’t lie, the vast majority of Hartford Hockey fans see the Wolf Pack as either irrelevant or an outright insult.

Up until now, despite sympathizing with these many frustrations, I’ve been kind of an exception to the rule. I still hold partial season tickets to the Pack. I’ve felt a loyalty to Hartford that overrides my distaste for the indifference that MSG and the various management companies who have run the day-to-day of the Pack have shown towards Whaler fans. I was one of the 600 who drove up to Worcester for the play-off game that was displaced by the circus, and I was one of the 1500 who helped set that record low attendance number two weeks ago. I’ve always said that no matter how much I hate the Rangers or whatever corporation runs the operations, I’ll still root for my city. I’ll still support the players who hit the ice in our name and I’ll support the game day staff and businesses who rely on events in Hartford. Until today, that is. Tonight I find myself staring at a pile of season tickets and realizing that every single ticket feels more like a chore than a game, that I’m dragging my kid to see games that neither of us care about, more out of a sense of moral obligation towards my city than out of any sense of enjoyment. Hockey is one of my favorite things in the world, a love that has run through my family for four generations.

I can’t do it anymore: The Wolf Pack is making me hate hockey. 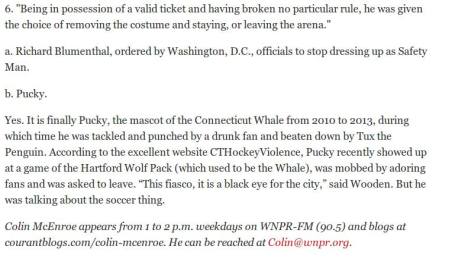 There was a lot of fallout from the piece I wrote about Pucky being removed from the Wolf Pack home opener, some of it quite supportive from people who felt the same way, some outright hostile from the usual cast of characters, and a lot of it in between. Mostly there was just a lot of it, more than I was prepared for. It was the first thing I’d ever written and within 24 hours about 4000 people had seen it and a lot of them had something to say. My friend Pete Hindle of the Examiner disagreed sharply but respectfully in his piece, making some fair points about the behavior about the game day staff while casting some aspersions at the Baldwins and their intentions I thought were unfair, and missing the bigger point that whether this was a misunderstanding or a stunt or not, there was only one appropriate response from Spectra and the Pack after the fact: a public acknowledgement of the incident and the perception that the Wolf Pack is a Hartford team that doesn’t care about Hartford fans. The latter is something that was long overdue before the Pucky incident.

Following the depressing 1500-fan game, I had a long talk with someone who I respect quite a bit despite our disagreeing vehemently on this matter. I don’t pretend to be non-partisan by any stretch of the imagination, but I consider myself fair and capable of entertaining a differing point of view. Following our conversation I agreed that in the interest of fairness I would reserve further judgement and send my ticket representative at the Pack a friendly email about my frustration, both with the Pucky incident and the situation in general, and give them a chance to address it or at least tell their side of the story.

I wrote that while I didn’t think it was a great call to remove Pucky after selling him a ticket and letting him through security, nor was I convinced that removing him instead of arranging for a waiver and preventing the subsequent backlash (“Pucky Forced to Sign Waiver” would not have made much of a story!), it was understandable that in the chaos of opening night things were handled less than perfectly. I shared with them the alarmingly high number of hits my story about the incident had received, the overt attempts by Springfield’s AHL team to poach disgruntled Whalers fans from Hartford. I expressed a sincere desire to see the Pack address the matter publicly and in a way that healed the rift, rather than becoming the impetus for a second migration of Whaler fans to Springfield. I meant it. The idea of abandoning the arena I’d considered home all of my life and rooting against Hartford made me feel kind of sick. It was really a last resort for me, but I was close to having had enough. I cc’ed Chris Lawrence, head of Spectra’s operations here in Hartford, on my email and decided to give a week. 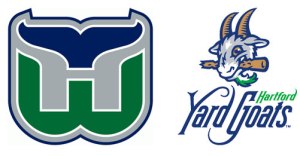 A lot of things happened in that week. The Falcons, in addition to their overture towards Whaler fans, invited Pucky up to Springfield for a Whalers night and offered a special group rate for Whalers fans. The Yard Goats, whose marketing saavy towards Hartford Hockey fans has made their brand an unprecedented success despite being the wrong sport and being embroiled in controversy surrounding their relocation, unexpectedly reached out to have Pucky present when their new mascot is unveiled. Colin McEnroe wrote about my piece in his column and sarcastically referred to this as an “excellent website”, and Jeff Jacobs used the Pucky incident as the closing metaphor (albeit a pretty poor one) in his article about the soccer stadium scandal. I’d argue the real trojan horse full of thieving sports executives is probably more likely to be the taxpayer-subsidizied farm team of an out-of-state corporation and not the grassroots group of diehard fans who spend their own money and time keeping Pucky in circulation, but either way, it’s kind of cool to get even a passing reference in the Courant. So many people have responded to the story of Pucky being unwelcome in his own home that he’s having to refuse appearances.

The coolest thing that came out of this whole mess was Pucky returning to the Hooker Day Parade for an impromptu Free Pucky rally. A small contingent was assembled on short notice and without an official support from the Booster Club or any other organization. The size of our group ended up not mattering when the marching band behind us (the excellent Hartford Hot Several) started playing Brass Bonanza, and the other parade contingents (as well as the crowd) stopped what they were doing and joined in the “LET’S GO WHALERS” chant all the way down Church St, outside of the XL Center. It was a powerful reminder that Pucky doesn’t have a contingent, he has a city.

After all of that, I found that more than a week (nine days to be exact), passed before I had  a chance to really think about the letter I wrote to Spectra about the Pucky incident. I had received no reply. I wasn’t necessarily expecting to hear what I wanted to hear, or for the team to capitulate to my will simply because I’m a season ticket holder, but nor did I expect to be ignored. I figured as a customer I would at least receive some cursory, if reluctant, acknowledgement of my concerns. I was totally unprepared to have heard nothing. I double checked my outgoing mailbox to be certain that I hadn’t made a mistake and failed to send the email, but there it was.

I went over all the conversations I’d had with people, on both sides of the fences, in the past week. I thought about what this fight really meant and what the point of it all was, if any. The Wolf Pack is probably on borrowed time regardless of what I say or do, and it’s success or failure have very little bearing on whether or not the NHL ever returns. It matters in a smaller way in where we draw the line in the meantime, what we’re willing to accept from the team that we subsidize and that bears the name of our capitol city. Last year we ate our fair share of crow (Jacobs, you might recall, was much more amenable to scandals when he got to be the one to break them), and the year before that when the Whale was abruptly re-branded to Pack immediately after the state agreed to pay MSG millions to keep that brand alive for a promised three more years.  But every year I do the math and despite the margins shrinking, still find myself deciding to stick it out in Hartford.

I feel for the game day staff and the downtown businesses and all of the other people who suffer as this brand inexplicably, and now it seems somewhat deliberately, tanks, but I don’t know how else to read this. One door down from the front gate of the XL Center, an AA baseball team with a laughingstock of a name and a stadium deal mired in controversy is setting merchandise sale records by honouring Hartford’s heritage and making the insanity even more glaring. What kind of team surveys the fans regarding their brand preference and then chooses the least popular option? What kind of team reaches out to potential season ticket holders and is rebuffed, over and over, by people who “don’t like the whole Rangers thing”, and then releases a shirt like this:

What the hell are they thinking?

I’ve come to a point where I think enabling this indifference does more harm than good. When attendance numbers like 1500 become normal, how many people lose their jobs? When do the cutbacks begin? More importantly, what am I doing to myself and my kids forcing them to sit through games in an empty arena with the ambience of a masoleum, the 2000 or so people who actually bothered to show up all being bitter weirdos wearing wolf ears and shooting me dirty looks for wearing green. The Wolf Pack gives free tickets to super fans who take pictures of me and my kids at games and post about us on their anti-Whaler Facebook page. Our home has become the site of a 19 year-long funeral attended largely by degenerates. I don’t want this to be the version of Hartford that my kids grow up with.

So I decided that I’m returning my tickets. Like my forefathers before me when the roof collapsed, I’m heading north to Springfield. And like them, I hope that this will be only a temporary sojourn. Until then, I will let UConn be the memory that my kids keep of my home town and split the rest of my time between Springfield and the NWHL.