What I do know is Hartford, and that there would be no NHL history here without Springfield. Beyond that, there is a long, intertwined history of affiliation between the cities, more extensive than most people realize. We’ve lost a lot of history in Hartford, but as Springfield is stolen away, we will be losing even more of what little remained.

The least interesting thing about the historical relationship between Hartford and Springfield hockey is the supposed AHL Rivalry between the Springfield Falcons and the Hartford Wolf Pack. Even if you’re one of the few people who can still muster up some enthusiasm for the moribund Rangers farm team which has twice displaced the Whale, those of us who recall the history of the 91 Club that saved the Whalers can’t help but find the manufactured “I-91 Rivalry” to be a bit tone-deaf and forced. Springfield was a good neighbor, arguably the only reason the Whalers joined the NHL instead of folding in 1979. After years of having it’s own identity and a historic friendship with Springfield, we were suddenly expected to become invested in the baby Rangers and a war with a city 30 minutes to the north. A city that, one season earlier, had been firmly entrenched in Whaler Nation.

It never took. Springfield had always been part of the same market, our cousin to the north. The contrived effort to turn Hartford into a suburb of New York and divide the market failed to incite any lasting passion. As the AHL became more boring and developmental, and the Rangers further alienated Whaler fans, it just made it harder and harder to care. Some folks went from Hartford to Springfield on day one, a natural transition since the Falcons were the Whalers farm team when they left. Over the years more followed.

After a series of grievous insults from the Rangers during their AHL occupation, from pocketing millions in affiliation fees as they killed the Connecticut Whale brand, to the removal of the Whalers banners from the arena, and kicking Pucky the Whale out of this season’s opening night game, I find myself in a curious position: The news that Springfield is losing its AHL team is significantly more upsetting to me than the thought of losing my own city’s team.

The interconnection between Hartford and Springfield actually began earlier than most folks, myself included prior to writing this, are aware. Back in 1972 as the then New England Whalers began their first and only season as a Boston-based member of the WHA, they signed an affiliation agreement with the newly-relocated New England Blades of the EHL.

The Blades only lasted 24 games of their inaugural season before folding. Indeed, it took a perfect storm for them to exist in Springfield at all. The venerable New Haven Blades of Connecticut had been displaced by AHL expansion granting New Haven the Nighthawks. The Big E Coliseum was suddenly vacant as the Springfield Indians found a new home at the Civic Center. The original plan was for the Blades to spend two years in Springfield before relocating to the planned Civic Center in Hartford, where they would share the space with a major league basketball team of now-defunct ABA. As we now know, instead of minor-league hockey and major-league basketball, Hartford ended up with major-league hockey; ironically a team that shared the team colors and partial ownership with the Boston Celtics.

The Blades, unable to average more than 1600 fans per game, faced budgetary difficulties than led first to players quitting and then to the Whalers terminating their affiliation agreement. The team folded shortly after. 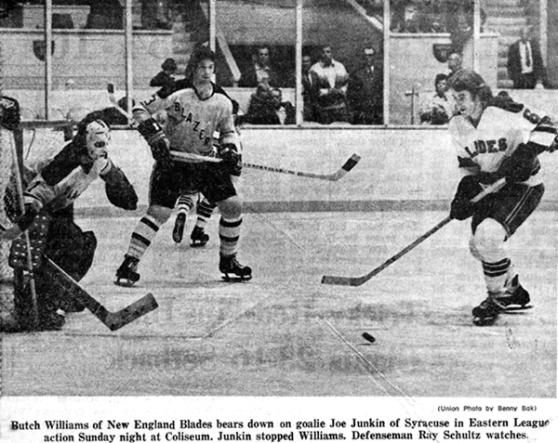 Despite their immediate success in Boston, the Whalers were never totally at home there. They played only one full season at the too-small Boston Arena before attempting to move to the Garden. Their status as a fourth wheel to the Bruins, Celtics and Braves of the AHL forced them to play some games at the Boston Arena and in Springfield. Howard Baldwin, seeing no way forward in Boston and having been spurned by crooked officials in Providence, made a deal to move to the new Hartford Civic Center and committed to Springfield full-time in the interim.

The real bond with Springfield was forged in early 1978 when a combination of heavy snowfall and shoddy construction caused the roof of the Civic Center to collapse overnight. The WHA was already deeply engaged in merger talks with the NHL, its teams folding left and right. The merger talks had been highly contentious and drawn-out and it had turned into a contest of endurance. Only the teams viable enough to survive the merger talks had a chance of outliving the WHA.

It should have been the end for Hartford. We were the only American market being seriously considered to join the NHL, and only then because of our role in founding and anchoring the WHA. The Civic Center sat slightly over 10,000 for hockey, less than the NHL minimum by a few thousand, and this poorly-timed disaster seemed to be the last nail in our coffin.

Instead, within two days of the roof collapsing we had a deal with Springfield that saved the team. From the Hartford Courant:

Praises Fans”No other team in sports could go through what we have just experience and still operate,” Baldwin said. “The reaction of the fans in Hartford and Springfield communities has been very supportive. Everyone has been pulling together and there is no question in my mind that we will have a very successful stay in Springfield until we are able to move back to our Hartford home.”

Not only did this deal keep Hartford alive in the immediate future, but it bought us time to rebuild and renovate the arena. When the Civic Center finally reopened it sat about 15,000 and was home to the Hartford Whalers of the National Hockey League. In the meantime, Springfield hosted a memorable chunk of NHL history that included the tail end of Gordie Howe’s career.

Hartford’s major league existence was notably marked by an on-again, off-again affiliation relationship with Springfield, and ironically, with the franchise with eventually became the Hartford Wolf Pack.

After the first year with the Blades, the WHA Whalers affiliated with the Providence Reds (the original form of the Wolf Pack) for 1976, their final year in Providence, then with

In 1980, the Whalers entered in a ten-year relationship with the former Providence Reds/future Hartford Wolf Pack in Binghamton. The returned to Springfield in 1990, bringing with them the previous year’s AHL-worst team from Binghamton. Springfield, coming off of a Calder Cup season, was initially displeased to have the best team in the AHL replaced by the worst, but coach Jimmy Roberts beat the odds and led Springfield to back-to-back championships, after which he was named head coach of the Whalers.

The Indians moved to Worcester to become the Ice Cats and were replaced by the Falcons in 1994. They remained Hartford’s affiliate until the bitter end in 1997. Many fans, whether simply out of geographic convenience, or out of distaste for the New York Rangers, just stayed in Springfield.

I personally walked away from hockey for many years when the Whalers left. The manufactured rivalry with Springfield was irrelevant to me just like the Calder Cup and everything else. The first time I attended a hockey game again (and actually paid attention and enjoyed myself) was in early 2011 when the Connecticut Whale faced the Springfield Falcons. In addition to the obvious nod to the Whalers, I noticed another historic similarity: 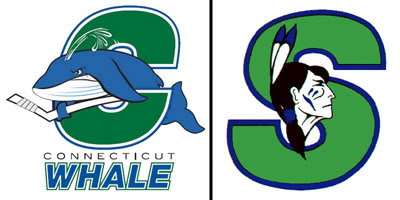 I wasn’t the only one to notice. If the contrived rivalry between Hartford and Springfield had seemed kind of thin before, it bordered on non-existent during the CT Whale era. There were plenty of Springfield fans showing up to the games and fan fests wearing green. It was a sense of identity bigger than an minor-league farm team, and totally divorced from the New York Rangers brand. In hindsight, it was probably too big for the vessel expect to carry it.

The heritage of the Indians and the Whalers are distinct but intertwined, icons of two cities caught in between Boston and New York and expected to assume the identity of one or the other as a matter of course.  It’s hard to feel anything but affinity.

It’s 2016. 19 years and counting since the Whalers left us, 22 years for the Indians. The Wolf Pack still lumbers on, half-dead and fully irrelevant, as does the tired desert team that dealt the killing blow to Springfield hockey.

Maybe Bruce Landon pulls off an 11th hour save and Springfield rises from the ashes. Maybe Hartford finally gets it act together and builds an arena to bring the Whalers home before it’s too late. Maybe not. Either way, no matter how much money they throw in the desert or into the Carolinas, they can’t replicate what we had here in Hartford and Springfield, collectively or respectively.

Cultural significance and passion are not commodities. They can not be bought or sold, and they sure as shit can’t be exported.

4 thoughts on “Last Exit to Springfield”