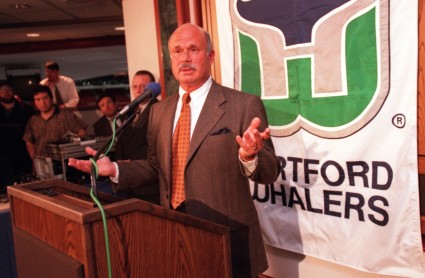 It’s been a while, Pete. I have to admit that while I sat down to write this with the intention of venting my anger for all the damage you’ve done to my city, for the heartbreak you caused when you stole our Whalers from us…the more I think about the more I think I’m as confused as I am angry.

It’s been eighteen years, Pete. Hartford should be a long-forgotten minor-league speed bump, long since receded from visibility in your rear-view mirror. You won your Stanley Cup. You clawed your way into the Hockey Hall of Fame, somehow. You even found a way to take Ronnie Franchise, the heart of Hartford, and keep him away from us in perpetuity. You murdered Hartford, razed the city, pissed on the ashes. So why is that as you achieve hockey immortality and reflect upon your legacy, the only subject that seemed to elicits any passion is Hartford?

In case you forgot, I’m referring to the remarks you made in the Detroit Free Press last week:

“When we went into Hartford, the season before they averaged 6,000 people a game — and that includes games against New York or Boston, where most of the crowd was New York or Boston fans. Hartford’s not a big city. Today, if there was a team in Hartford, it would be the smallest market in the league by a mile. You competed for business with all the New York professional teams, all the Boston profssional teams and even a little bit with the Flyers and Islanders. I don’t know why the people there are so upset. The team hadn’t ever won a thing. They had a celebration for a first-round playoff loss.”

My knee-jerk gut reaction, like that of most Hartford faithful, is to fly into a rage at both the arrogance and inaccuracy of your words about Our Fair City.

We averaged 6000 people the season before you came? Really? The only season I can find under 10,000 is 1979, which Hartford spent in an AHL rink in Springfield after the Civic Center roof collapsed.

Smallest market in the league by a mile? The Hartford metro area is home to 1,215,211, exactly 695 people more than Raleigh, and very few of those people put NASCAR before hockey.

Never won anything? I know the World Hockey Association has become an obscure piece of sports trivia these days, but I imagine as a Detroit native you may have followed the exploits of Gordie Howe as he defected to the WHA. Or at some point it may have come to your attention that the franchise which you’ve owned for 21 years began its existence as the New England Whalers of the WHA, AKA the first national champions to claim the Avco World Cup for their own,

Finally, and I admit this is a bit nit-picky, but the parade which was thrown for the Whalers was for a second round  play-off elimination, NOT for a first-round elimination. I’d chalk this up to a mistake if that parade in the heyday of Whalermania wasn’t so unique in being the largest parade ever held in franchise history, outdrawing the Hurricane’s Stanley Cup victory parade by a good 10,000. But I’m sure that’s not news to you.

You’re a lot of things, Pete. The words arrogant, dishonest, destructive, and cancerous all come to mind. But you’re not stupid. Maybe you’ve come to believe the false narrative you had to weave to justify the crimes you’ve committed. We know the story well in Hartford, it’s been repeated so often that some folks mistake it for reality.

You know how it goes: Small-time city stumbles into major leagues, never fills the seats, is mercifully put out of its misery and relegated to minor-league status by the brave governor who stood up to a greedy billionaire and secured our future as New York’s favorite parking lot. Maybe you really have come to believe that, but like I said, I don’t think stupidity is counted among your many sins.

If we agree on nothing else, Pete, it’s the love of hockey. I may hate what you did to my city, but unlike Governor Weicker, who sold you our team knowing it would head south in exchange for a cushy job on the board of Compuware or subsequent Governor (and now twice-convicted felon) John Rowland who happily finished the job in order to chase a pipe dream of landing the New England Patriots, I think in some different world where you didn’t destroy my city we could sit down together and have a beer and shoot the breeze about Gordie Howe. I believe you love hockey. The many millions of dollars you’ve flushed down the toilet (much like the puck and Whalers history flushing down the toilet which is your team’s logo) are irrefutable evidence of our commonality as hockey fans.

I’m writing this today because of your recent harsh words about Hartford, but some other words of yours have stuck with me for many years. A year into the Carolina experiment, having sold a whopping TWENTY-FIVE season tickets for the first season, you came dangerously close to admitting defeat. Too late to help yourself or Hartford, but that quiet admission of guilt has always been some small comfort to me:

To his credit, Karmanos refutes the perception that Hartford is not a big league town. Any team could survive there, he claims, as long as the circumstances were right. “I think (pro sports) is more than capable of surviving in Hartford with the right kind of deal. The governor didn’t understand…how important having a major league team was. They can make all sorts of snide remarks about the Hartford Whalers and all that, but the fact was it was a respected NHL team.”

There’s no way to reconcile these two statements, my old friend. We’re a major league city or we aren’t. We were a respected NHL team or we weren’t.

Almost as telling as the unexpected rage towards Hartford in your remarks to the Detroit Free Press, is your dispassionate tone in discussing the remainder of your legacy.

Your inclusion in the 2015 class of HHOF inductees? “My stats are pathetic — zero goals, zero assists, zero penalties.”

Your future with the Hurricanes? “I don’t know.”

It’s not just in these answers that I began to detect cracks in your facade of arrogance. While the Hurricanes have publicly disavowed their past in Hartford, there remains the matter of the not one, but two, minor league teams you’ve owned with a familiar color scheme and a predilection for the Brass Bonanza, the Plymouth Whalers and the Florida Everblades.

There’s a part of you, Pete, buried beneath that bravado and unwillingness to admit the error of your ways, which is still a true hockey fan. And like all true hockey fans, you know what your legacy will be. Not as the owner of the 2006 Stanley Cup Champions. Not as a 2015 Hockey Hall of Fame inductee. Not as the man who brought hockey to NASCAR country. You know what people think when they hear your name, what they will always think long after you’re gone.

Peter Karmanos? Isn’t that the guy who ruined the Hartford Whalers?

THE PRESENT DAY: The Hurricanes play the Blackhawks in front of empty seats (left) A packed house for UConn hockey in Hartford (right)

In 1997, the final season of the Hartford Whalers, we drew an average of 13,680 fans to each game. 18 years later, the Carolina Hurricanes are currently averaging 11,412 per game in those greener pastures. Hartford Whalers merchandise has remained a consistent top-ten seller since it was reintroduced in 2010. Hurricanes merchandise, despite the team actually existing, is markedly less popular.

So I’m not going to rage at you, Pete, no matter how much part of me would like to. It would be like kicking a dying stray dog for growling impotently. You’re still talking about us all these years later for one reason: Hartford is the only part of your legacy that matters, and you botched it in as monumental manner as humanly possible, destroying our market, Raleigh’s, and your reputation in the process.

You want to make it right? Pull the plug on this abomination. Send Ronnie and the franchise home to Hartford. All will be forgiven. Your legacy will amount to something more than a punchline.

A dishonest degenerate speaking to a young hero.